YONEX ASTROX 77 vs DUORA 10: Which racquet is better?

So Yonex Astros 77 vs Duora 10: which racquet is better? We will help you decide with this badminton racket comparison. 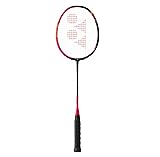 With NAMD technology, it greatly improves the adhesion of graphite fibers and polymer resins by attaching nanomaterials directly to graphite fibers. This material allows the manufacturer to make the racquet body thinner but very solid. These improvements help players reduce swinging angle, not needing to spread their arms too much but still have fast, powerful and accurate shots that the body quickly recovers to the original state.

In addition, the grips are also used at the head and the T-joint to help distribute weight throughout the racquet. Players can perform consecutive hits without much effort.

With the new design that helps distribute the weight evenly from the beginning. The connection point (T-shaped) and the grip help the racquet reduce twisting, quickly recover to the original state after each stroke. As a result, the player has a faster swing than seen.

With the power of the smash increased to 7.1%, the speed difference of the first blow compared to the last is very small. The dam angle increases by 2.3 degrees to make the bridge more plugged, as measured by Yonex’s robot.

Feel the reality when using the Yonex ASTROX 77 badminton racket

When holding the Yonex Astrox 77 in the first-hand feel is a racquet average weight tends to be the heavy head. When testing Astrox 77 I feel good with very strong smashes, fast speed compared to the racquets I’m using. The sound of explosions is very interesting in addition to that the head of the racket feels stable without vibration. But with the 3U version, it seems a bit heavy for the players who have not hit the heavy racket. With average hand force then 4U version seems more reasonable.

Yonex Duora 10 is a badminton racket manufactured from Yonex and used for the first time by Lee Chong Wei. Most impressive is the 2015 China Open championship when he defeated both Lin Dan and Chen Long for the first time crowned. The only title he lacked in his collection of 13 Superseries tournaments.

Yonex Duora 10 currently has 4 different color versions. With the old version being orange-green, the latest version is the orange-blue version which is the racket that Lee Chong Wei has been using since the 2017 BWF Olympics.

The technology on Duora 10 uses dual optimized system technology with the Box Frame surface using the new Nanometric DR material. And the backhand uses the more elastic metal thread called Nickel-Titanium covered with compound Ni-ti Fiber (super-elastic metal). This has the effect of increasing the bounce and increasing the speed of the shuttle by 9%, maximizing the effect in the phases of support, defense, backhand fighting.

In addition, Yonex Doura 10 could not help but bring the outstanding technology of the Tri-Voltage system – helping to increase the ability to attack, anti-vibration technology Nanometric …

Sweet spot: Astrox 77 has a large sweet spot area for the ability to achieve powerful shots. So players can enjoy shooting time even from the first shot. Duora 10 is having a sweet spot focus.

Hardness: Duora 10 has a stiff shaft so players who want to create more power on the hits will play with Duora 10. For comparison, players can feel an additional strength in Duora 10 compared with Astrox 77.

Processing of photos at the Net: Both racquets perform well during testing, however, we will provide additional advantages for Astrox 77 compared to Duora 10.

Defense: Defense of Duora 10 is better funded than Astrox 77. However, with the Rotation creation system technology, Astrox 77 is also very good at making drops, cross-angle shots and half-smashes.

There is no definitive and objective answer to a better racquet.

Badminton racquets are an incredible subjective world, everyone has their own choice for design, the ability to give strength for a smash, or the advantage in defense.

But it is simple to see that Astrox 77 is the obvious choice for those who have a game that relies heavily on powerful smash. While Duora 10 is for more comprehensive players.

Whichever brand you choose, the only important thing is that the racquet helps you unleash your full power to win against your opponent.

And if you do, then there is no question that you are holding the perfect racket.