The History of Badminton Badminton is an ancient and popular game that is played across the world. Many times, several questions may arise in your mind. Do you know the history of badminton? Where does badminton get its name from? You are playing this game, but you do not know about the origins, facts, and history of this popular game.

Badminton has a cosmopolitan history, which is a bit complex but interesting. It is an ancient game that is modernized in England. Many passionate badminton lovers and players are unaware of the real and old facts about this game. It took a lot of time to introduce this game in significant events like commonwealth games and the Olympics.

Players across the world are leading this game by earning the victory. You will be surprised to know that badminton is going one step ahead and allows its players to play this game without a net in Germany. The rules of badminton are rapidly changing, and the federation is making it more interesting for the audience as well as players.

We will cover the historical part of the badminton as well as new things that are getting introduced in different countries. You must be aware of the game deeply so that you can answer every question related to this game.

In the following write-up, we will be discussing some of the unknown historical facts about badminton. You will be shocked to know about this ancient game played by people in many countries.

History and Growth of Badminton

There are specific eras and periods through which badminton has gone through. This game was popular in ancient times but with different names. We will know those eras of badminton and how it is improvised and got popular across the world. 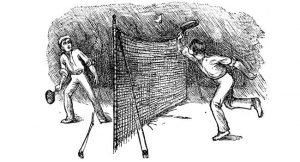 In ancient years, the badminton-like sport was played by the people of Greece and Egypt. The game was known as battledore (bat or paddle) and shuttlecock. In that game, two players hit the feather-made shuttlecock by small racquets. Badminton was originated in ancient civilizations in Europe and Asia more than 2000 years ago.

In the 1600s, people in England and other European countries passed their time by playing battledore and shuttlecock. Two people hit the shuttlecock by simple bat backward and forwards without allowing the shuttlecock to touch the ground.

In the mid-19th century, modern badminton was introduced in British India by British military officers. They added a net to the traditional badminton game. The improvised sport was famous in the British garrison town of Poona. After that, a new name was given to the game, i.e., Poona or Poonah.

The upper-class people preferred to use woolen balls in windy or rainy weather, but after some time, they switched to shuttlecocks. Retired officers that got back to England generally play this game. This sport was introduced to the Duke of Beaufort guests as ‘Badminton’ in Gloucestershire. It is where badminton gets its name.

The first Open tournament of badminton was held at Guildford. All England Championships were also held in the following year.

In 1877, the Bath Badminton Club was established. This club introduced the first set of rules of badminton game. In 1893, the first badminton association was formed in England. This association worked as a world federation until 1934.

In 1934, the International Badminton Federation (IBF) or Badminton World Federation (BWF) was formed. Nine founder members of the federation belong to England, Ireland, Wales, Holland, Denmark, Canada, New Zealand, Scotland, and France. In 1936, India joined the federation as an affiliate.

6. Badminton as an Olympic Sport

After introducing badminton in 1992 at the Olympics, five countries won gold medals, including China, Korea, Indonesia, Denmark, and England.

All the competitive badminton events are played in an indoor court where there is no effect of light wind on the shuttlecock. On the other hand, recreational badminton is an outdoor summertime activity. The rectangular badminton court is 44 feet long and 17 feet wide for singles and 20 feet wide for doubles. A net is placed in the middle of height 5 feet across the width of the court. There is a clear space of 4 feet all around the court.

9. Sale of Commercial and Television Rights

After Thomas and Uber Cups badminton events, the sale of commercial as well as television rights was a deal of multi-million dollars. Growing companies from Asia and Europe started bidding for rights. On the other hand, television companies were buying rights for the 1997 World Championships in Glasgow, Scotland.

There was a turning point in the growth of badminton in 1994. A contract of $20 million tripartite was made for sponsoring World Grand Finals. This deal was signed between IBF, IMG (International Management Group), STAR TV. In the agreement, STAR had to invest money in the promotion and development of badminton. After that, STAR gets exclusivity for exploiting commercial and television rights.

According to IBF executive director, David Shaw, the deal was good enough for both the parties. They wanted to collaborate with reliable television partners to attract audiences towards badminton across Asia to its prime sports channel.

10. Badminton in the USA

In 1956, American won three events in the Uber Cup. Badminton is liked by people in the USA and played for fun. It became a high-profile sport after the Atlanta Olympics. The event became the preferred sports in the US. Many celebrities came to watch the event like Paul Newman, Jimmy Carter, Chelsea Clinton, etc.

In 1995, the IBF initiated a new tournament, Hong Ta Shan Cup, in California with the best players and big winning prize. The Hong Ta Shan Group sponsored the US Open and raised the prize money to $200,000. It made the World Grand Prix event historical in the series.

Recently, a variation of badminton is introduced in Germany, which is known as Speed Badminton or Speed minton. This game is played without placing any net in the middle. Nowadays, it is becoming popular across the world.

England was the country behind the modernization of badminton sport. Many Asian countries ruled the sport in almost every event, including the Olympics. These countries have world-class talented badminton players that are winning men and women championships consistently. Currently, badminton is one of the popular and organized games in all nations.

All the sponsors and television companies are well attracted to badminton sport and giving access to the economy of Asia. If we talk about spectators, they are rapidly increasing and excite to watch every angle, strategy, and events of the game.

The history of badminton is ancient, complex, and engaging. People across the world play badminton with so much interest and passion. They like to play this game casually on a beach, or parks. It is also a professional game which is performed indoors in a court. This sport has a deep history which is unknown to casual-sport-playing people as well as sportspersons.

It is better to know and understand the game before liking it. The history of any sport is a primary step to know about the details of the game. Here, you get an opportunity to study detailed historical information about the badminton, which is crucial for all types of people who like badminton in any way.

You get to know about different phases of the badminton and how it gets modernized. It was merely a small game which now has turned an Olympic sport. It is excellent to know how badminton crossed the levels of popularity and techniques to get on this position. Now, every person across the world is aware of this sport and likes to play this game.

Now, you are one of them who knows about the history of badminton deeply and can step into the world of this game with high confidence. You know the reasons behind the rapid and successful growth and development of this game around the globe.