Tennis vs. Pickleball – What’s The Difference? 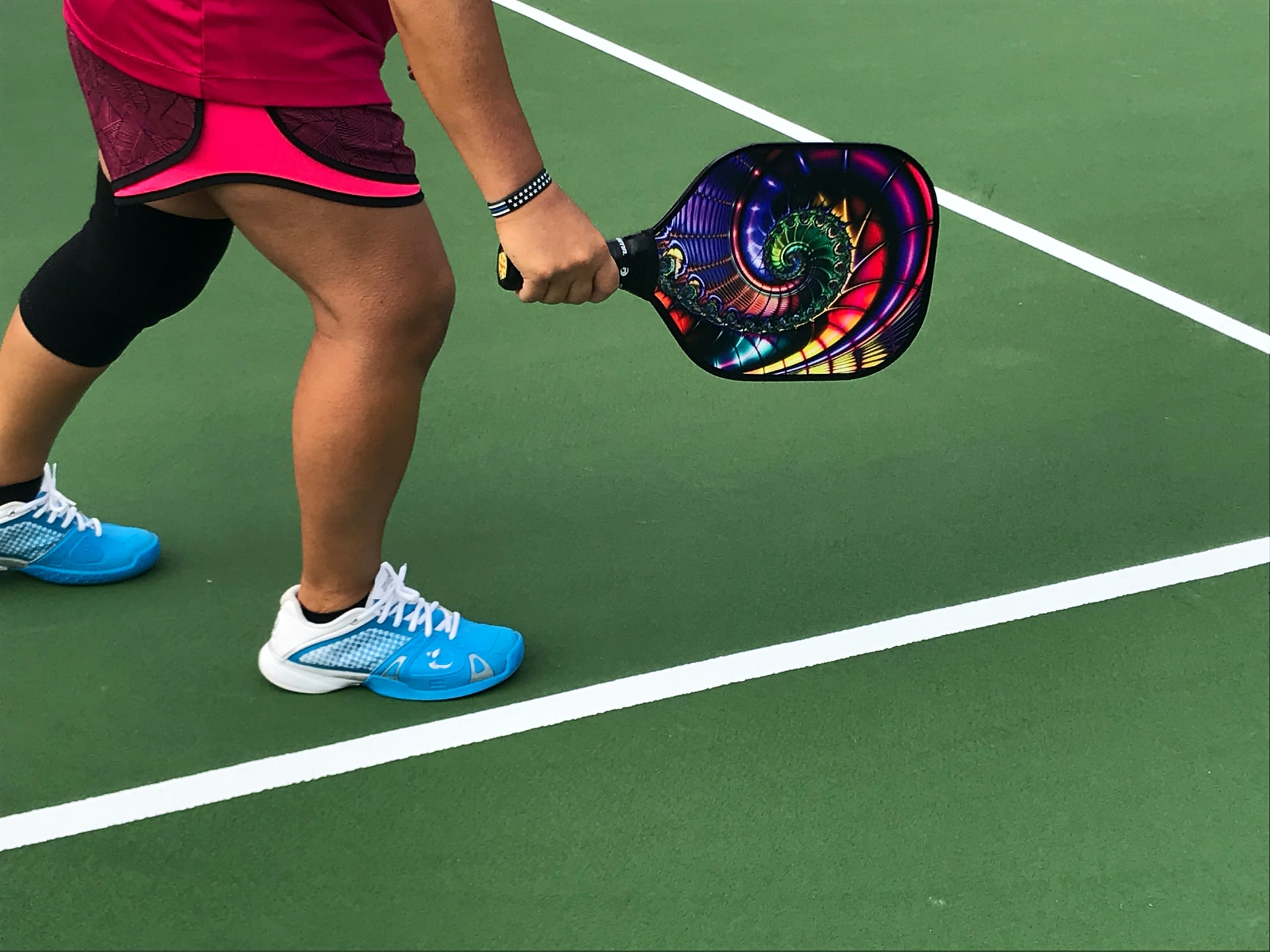 Just off the coast of Seattle, pickleball was born. In this article, we’ll look at Tennis vs Pickleball, and see the differences, along with which game you should play.

What the Deal with Pickleball?

Approximately 50 years ago, on Bainbridge Island, a few dads: Joel Britchard, Barney McCallum, and Bill Bell, along with their kids, took advantage of an empty badminton court. Though they didn’t have the necessary rackets, they improvised with ping-pong paddles and a whiffle ball. Within two weekends, these two dads had created rules for what we now know as pickleball.

It’s speculated that the name, “pickleball,” came with combining their dog’s name, Pickles with the word “ball”; however, this has not been truly proven.

Even though pickleball is relatively new compared to tennis, it is definitely gaining popularity, but how do you know which is the sport for you? Check out our comparison of the two relatively similar yet very different sports.

Tennis Vs Pickleball – The Main Differences

One of the most noticeable differences you are sure to notice between the two sports is the actual racquet, or paddle, as it is known when describing pickleball.

A tennis racquet is designed with holes and carbon fiber. Depending on the intensity and the level of competitiveness, the way the strings on a tennis racquet are spaced out can impact one’s game on the court.

When you think of tennis, it’s not the big names that cross one’s mind, it’s the yellow fuzzy balls that are used. With pickleball, the sport uses a plastic ball, very similar to a whiffle ball, as it has holes, which makes it very lightweight. Due to their airiness, a whiffle ball bounces low rather than the tennis balls, which go high and far.

[amalinkspro type=”showcase” asin=”B07HMXWB7C” apilink=”https://www.amazon.com/dp/B07HMXWB7C?tag=affiliatejas3-20&linkCode=osi&th=1&psc=1″ new-window=”true” addtocart=”false” nofollow=”true” sc-id=”4″ imgs=”LargeImage” link-imgs=”false” specs=”[OFFICIAL REGULATION SIZE] The net meets official pickle ball guidelines at 22 wide, 36 high at sidelines and 34 tall at the center. Set up your pickle ball tournaments or casual games with A11N today!~~~[FAST ASSEMBLY] Each part on the kit is labeled and no tools are needed for assembly, making setting up your pickle ball game fast and straightforward.~~~[PLAY PICKLEBALL ALLODIALLY] The entire net can be toted around by a robust carrying bag and weighs just 20 lbs. It allows you to set up a pickle ball match anytime and anywhere you choose.~~~[STEADY FRAME AND HIGH-QUALITY NET] A11N pickle ball nets can withstand any weather. Its sturdy interlocking metal frame, solid PE knotless net, and dual PVC fabric is more durable than the polyester used by other brands.~~~[BRIGHT COLOR SCHEME] All metal frame is coated by yellow stoving varnish and combine with the black color net, makes the A11N pickle ball net to be more cognizable and brighter around your white color court.~~~[SATISFACTION ] Your satisfaction is important to us, and we want you to buy with complete confidence from A11N SPORTS. As a result, we offer unconditional exchange/return/refund services within 60 days after your purchase.~~~Material Type: PE Knotless Net & Strong Metal & PVC Tarp~~~” btn-color=”#ff9900″ btn-text=”Buy at Amazon” alignment=”alignnone” hide-prime=”0″ hide-image=”0″ hide-reviews=”0″ hide-price=”0″ hide-button=”0″ width=”750″]A11N Portable Pickleball Net System, Designed for All Weather Conditions with Steady Metal Frame and Strong PE Net, Regulation Size Net with Carrying Bag[/amalinkspro]

If you are looking for a paddle sport that doesn’t require too much running, then pickleball could be your sport. Tennis is played on a court approximately 60′ x 21′ while pickleball is played in the space of 20′ x 36′.

Pickleball is also a sport that can be played by yourself, single, or in pairs, as opposed to tennis, where you need a minimum of one other player to play.

With pickleball, the goal of the game is to reach 11 before the other team; however, the caveat is to ensure a difference of two between the other team. Scoring in pickleball is announced in three numbers, the serving team score, opposing, and points.

The Cons to Pickleball as a Tennis Player

If you are an avid tennis player, pickleball may not be the game for you. Why? For one, pickleball is a much slower pace than tennis. Given that the court is also much smaller, it means you aren’t getting as much cardio as you would with tennis.

Not only is the slow pace of pickleball not suitable for a competitive tennis player, but the player positioning can also impact a competitive tennis player. For example, with pickleball, because the ball is light, it does not have the same range as a tennis ball; therefore, most of the game takes place by the nets. In tennis, the game is played at all corners and can sometimes require back and forth running. No part of the court is off-limits in tennis.
One other con about pickleball for anyone who is an avid tennis player is that minimal power is required to hit the ball. Successful tennis athletes ensure that off the court, they are not only working on their stamina but their strength as well, as their serves can go up to 110 km/hr!

In pickleball, a simple tap is enough to rally the whiffle ball to the other team.

Pros of Playing Pickleball over Tennis

The one thing that pickleball players have over tennis players is precision. Given the lightness of the ball, it can be hard to ensure accuracy; therefore, every hit has to be thought out and has to count. In tennis, when players volley the ball, precision is achieved by using specific varying hitting techniques.

For those who may have never played tennis before, pickleball does help teach you how to best choose the type of shot to take. For example, given the limited playing area in pickleball, it’s important that players know whether to do a drop, finessed, or angled shot. These are just a few key strategic moves that can help a new pickleball player.

While we have shared the pros and cons of playing one sport over the other, here a few notable differences:

Sometimes you can get hit with pickleball, and it’s okay; however, with tennis, it is considered bad sportsmanship to aim at your opponent’s body.
A tennis court is larger than a pickleball court, with tennis players taking advantage of every space. With pickleball, there are designated non-volley zones.

Why is Pickleball Popular?

According to the American Pickleball Association, there has been a surge in pickleball players and interest, but why?

For one thing, pickleball is one of the few sports that allows anyone of any athleticism and experience to play. Not to mention, it is a sport that requires minimal and cost-friendly equipment. Of course, if you are a competitive pickleball player, some paddles can get pricey as they are meant for competitive games rather than leisurely or casual playing.

Some who have taken to pickleball are individuals who had previously played tennis or who were injured and are looking to maintain some level of activeness. It may take some time to adjust to the rules, and the racquet itself, as it is almost as though you are playing ping-pong on a full-size court rather than a table.

Which is Easier, Tennis or Pickleball?

Between pickleball and tennis, there is no clear-cut answer as to whether or not one sport is easier. This is something that is entirely up to the player; however, there are a few things to consider if you are trying to determine whether or not one is easier than the other.

Ask yourself, why am I playing pickleball? Tennis?

If you are looking for a fun, social, and leisurely activity, pickleball is the sport to go with.

Pickleball does not require a lot of stamina, let alone cardio, which means you can still play and talk at the same time.

With tennis, it is a bit more challenging to talk and play, as with the court size, it is near impossible to achieve a casual conversation with your opponent.

There are athletes who once played tennis competitively turn to pickleball as an alternative to no longer playing tennis. If you are looking for an activity that is easy to play physically, pickleball is definitely a recommended go-to fun activity.

Between tennis and pickleball, the notion and goal of the game can be similar; however, they are two very different sports. From the way they are played but also the overall intensity. Sure, there is a ball that is volleyed back and forth between players, but pickleball is more like squash in that you can play by yourself.

One way of looking at pickleball is it’s one of the few strategy paddle games out there. Every hit and tap has to be precise. In tennis, it is somewhat strategy in the volleys, but it is also very much about agility and strength.

There are very few sports where players of all ages, skills, and experience can play together while they still have fun. In tennis, it can be frustrating playing with someone who may not be the same skillset. With pickleball, you can grab a bunch of friends and family members who may or may not have heard of pickleball and play.

Even in competitive pickleball, there is a different aurora to the players in that, it is, even in its most competitive level, fun and intense. With competitive tennis, there is no fun on the courts, it is strictly business and players play to win.