How Long Does a Badminton Match Last? 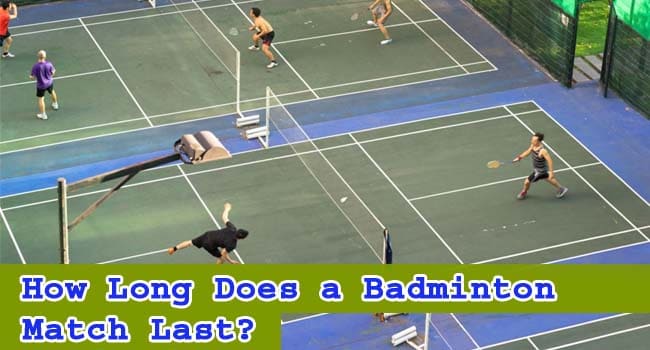 A casual player plays badminton without following any rules. He does not bother about scoring points and rounds of this game. But, do you know, how long does a badminton match last? The professional badminton players play this game in three rounds of 21 points.

In the following write-up, we will discuss badminton rules of scoring and how long does it last. There are specific rules of these professional games which should be followed to win the game. Many casual players are unaware of the lasting time of badminton matches. It is essential to have in-depth knowledge about the game you love to play.

A badminton match is of three rounds of 21 points. Let’s read how a match starts and proceeds with the positioning and score.

Know How the Badminton Match Takes Place Step by Step.

There are three rounds in the badminton game in which a player wins the game who has scored maximum points in two rounds. The tournament starts with coin tossing which decides the side that serves first. The one who wins the toss throws the shuttlecock up and passes it to another side.

2. Points in a Match

Whenever you win a rally, you will get the point. The first player with 21 points wins the game. In the club tournament of badminton, you have to choose players for the next game. Whereas, in a standard league, it is a match, i.e., the best of three games. A player only wins the game when it wins two games. Thus, a match lasts for two or three games.

When a player wins a rally, he will get the next serve. So, if your opponent served in the last rally, then the serve will pass to you. If you are serving in the match, then you will keep on serving.

4. Say the Score of Server First

Before starting each rally, you should say the score of your opponent. It is easy to lose score track and saying it can prevent disputes between rallies. If a player with 10 points is serving his opponent with 15 points, then his score will be 10–15.

If you are winning the rallies, then you will keep on serving from a different side every time. As zero is an even number, this game will always start from the players serving from the right service court.

The score of the server determines the position of the receiver. The receiver will stand diagonally opposite from the server in the service box. Both badminton players will either stand in the even service courts or the odd service courts.

In doubles, each pair wins the points. The even or odd rule is also the same in this event. If the score of the server is odd, then he will serve from the left court or vice versa. The receiver will position itself in the diagonally opposite service court.

When the serving side wins a rally, then the same person will serve again from another service court. Only one person keeps on serving until the opponents win a rally and get the serve.

8. Every player has a Service Court

9. Serve and Win the Rally

If you are serving, then your side wins the rally. You have to serve again from the other side in the next rally. You and your partner must be in different service courts. The server’s partner can wherever he wants but needs to remember his service court for future rallies.

10. Receive and Win the Rally

If the receiving side wins a rally, then the serve will pass to them. From the previous rally, the service courts will not change. If their score is odd, then the player on the left service court will serve or vice versa.

There is a 1-minute gap in between every game. In the third game, the badminton players can change their ends when the leading score becomes 11 points.

The players get a rest time for 1 minute between every game. The scoring and positioning of players matter a lot in this game. A mistake leads to the deduction of points. It is necessary to know the rules of badminton so that you can win without making any mistakes.

You need to win at least two points up to 30 points in each match of the best of three series. To prevent the dragging of games, the score remains 29, and the next scored point will determine the winner.