Can You Use Badminton Racket for Squash? 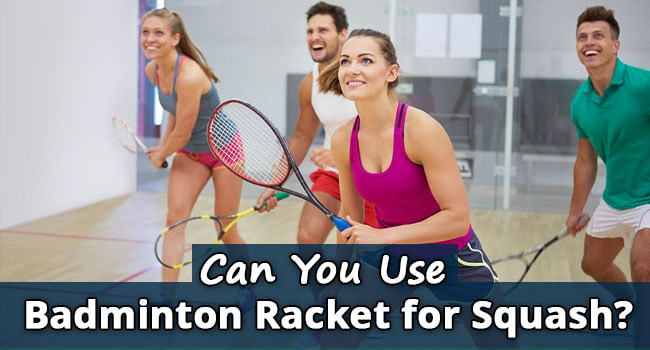 Badminton and Squash are one of the most enjoyable games to play. Squash is comparatively a different game when it comes to shot without netting obstruction. But, can you use a badminton racket for Squash? Both games have similar fast-paced movements, but if you want to try to play Squash using a badminton racket, then maybe you are making a mistake.

Can You Use a Badminton Racket for Squash?

What Key Factors Should a Badminton Racket Have to Play Squash?

The following are some of the factors that a racket must have to play Squash with it.

1. Shape: There are two types of racket throats, which are referred, as teardrop and closed throat. Both the shapes have a larger sweet spot that provides more power to the player and less effort to hit the ball. Closed throat rackets are recommended to the players, who are professional and have great control.

2. Balance: Rackets can be light-head, heavy-head or evenly balanced. The light head offers excellent maneuverability for quick volleys and flicks shots. It is not easy to control it when at speed. Heavy Head rackets are comparatively easy to control. Professional players prefer heavy head rackets for the fast-paced and attacking game than light head rackets.

4. Beam: Racket beam measures between 16 to 21 mm. Skilled players prefer rackets with a thinner beam as it offers more maneuverability than the thicker beam rackets.

6. Grip: Most of the squash rackets use the same grip size as standard. It is also possible to build up the racket grip, as per the player’s preference. Thicker the grip, lesser the control.

What Things Differ When You Play Squash by Badminton Racket?

There are many differences between the two sports in terms of techniques, equipment, and rules.

2. Ball vs Shuttlecock: Squash is played with a hollow rubber bouncy ball that can absorb speed, in impact squashing into the surface. Whereas, Badminton is more like an aerial game with many shots hit over the head. It uses a high-drag object i.e. shuttlecock which is made from cork along with goose or duck feathers embedded in it.

3. Wrist Technique: The wrist technique is essential in both Squash and Badminton. In Squash, the technique known as the cocked wrist is used which means the wrist will remain firm and static throughout the shot. It helps in pushing the ball towards the target zone with accuracy on the wall. But in Badminton, the wrist is used in flicking motion that provides surprise and disguises to shots.

4. Movement: Badminton is a game of repeated jumping. The net is high, so repeated good-quality jumps will help to aim, and hit the shuttle down over the net. Whereas Squash is more of a game of lunging, players have to move side-to-side keeping low and lunging repeatedly to generate more accuracy into their shots.

5. Court: Squash is played in an enclosed court, with walls and the ceiling, where players share the same space on the court. But in Badminton, an open court or outdoor beach is also preferred, and each player has their own space on either side of the court.

6. Rackets: Squash rackets are a little heavier than badminton rackets weighing in the range of 110 g and 150 g with 68.5 m in length. All professionals use teardrop-shaped rackets with a larger sweet spot. Badminton racket can be in either oval or isometric in shape. They are lighter in weight with a weight of around 100 g.

So, you cannot use badminton equipment, rules or court to play Squash. Squash is a game that uses a heavy racket with a larger sweet spot. If you want to replace only rackets to play Squash, then also you cannot play it.

The answer to your question of “Can you use badminton racket for Squash?” is no. It is not recommended to play Squash with a badminton racket, as it is lighter in weight and can be used to hit the lightweight object, i.e., a shuttlecock.

Whereas, Squash is played with the hard and hollow rubber ball for hitting it on the wall. The rackets to play Squash must have high-quality intensity strings for more control and power to hit the target on the wall. Therefore, playing Squash with a badminton racket is not a good idea.